Exactly When Will It Be Open? Does any one know for sure? 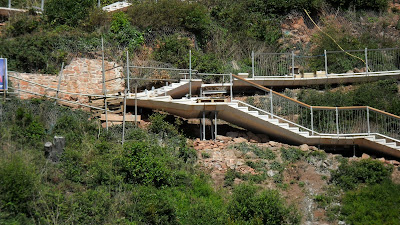 It isn't the time it is taking to finish the work but the continuing statements made by Torbay council saying it would be ready when it was obvious it wouldn't be. What was the point in all that other than a short term bolster to some politicians flagging position. For instance the deputy mayor said it would be open by the end of July; come the end of July when it wasn't open he said, Well I only meant the scaffolding and the Blue Wall would be down by the end of July and you would all be able to look at the cliff face, not that anyone would be able to walk up the walkways. No mention of that in his original statement.
I used to be an avid supporter of the council when the work started in Jan 2008 but now I believe they should have removed the trees, reopened the top foot path (Rock Walk) and left the cliff face alone.
Look at the photo taken yesterday (all the walk ways look like this) and tell me they aren't going to leave it like this. If they are then Councillor Lewis's statement that it is being built to last 50 years is clearly outrageous. If they aren't then how long will it take to complete the work. I don't care if it is next July; I just want to know.
Posted by David at 16:13 6 comments: 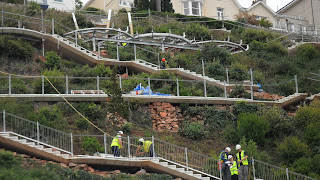 This is Rock Walk yesterday with only 37 days to the Official Reopening. All looks very busy, lots of work persons working hard. Hope they get it finished or someone is going to sound a little embarrassed when he says "I now declare Rock Walk well and truly open. Err..... sorry but you can only look for the time being but the weather has been against us. Come back in a couple of months." I only say this because Chris Lewis, the deputy mayor did say it would be open by the end of July. Mind you he didn't say which July.

It'll be great when it is finished though.

A SPECTACULAR light show using Torquay Rock Walk as its backdrop will mark the official opening of the £3million restoration project.

A day of celebrations is being planned to mark the end of the controversial three-year project to clear and secure the rock face and create a tourist attraction with its flying staircase, lights and artworks.

Events on October 2 will culminate at 8pm with a performance by Seth Lakeman at the Princess Theatre.

The gardens will be officially opened at midday and there will be live performances and music. There are plans to have workshops and stalls all day for all the family.
The largest community choir in the Westcountry will strike up as dusk approaches, singing some 'rock' songs, followed by an especially commissioned 20-minute light show.
Events will be free, but the Seth Lakeman performance is ticketed at £19.

Cllr Lewis said: "While the gardens will be open for the public over coming weeks, we wanted to arrange something special to really celebrate the new gardens and get local residents and businesses involved.

There is still much work to be done and the place looks a bit of a mess but it is taking shape.
Posted by David at 09:03 No comments: