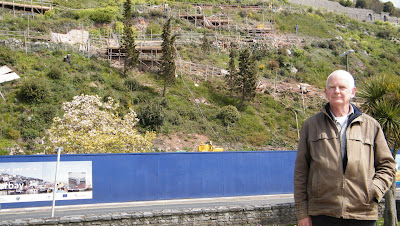 As you can see there is lots of scaffolding zig zaging up the cliff face. In time this is where the walkways will be. Everyone is confident they will be complete by the end of July and the blue barrier will be removed and tourists and locals alike will be able to enjoy walking up the cliff and finally see the views of the Bay and Paignton and Brixham. Been a long time coming.
Posted by David at 23:19 1 comment: 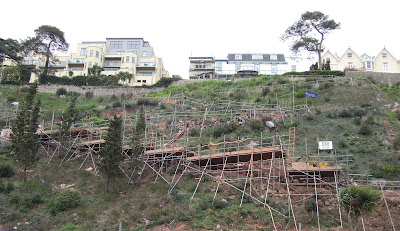 So now the total bill for years of neglect is going to be close to £3million. Councillor Lewis, in charge of the project, confirmed that the recently discovered problems on the cliff face will also put back the opening until the end of July. Well what's an other month in the 2 and a half years it has already taken?

No mention was made as to when Rock Wall it's self would be open. Rock Walk is the pathway along the top of the cliff face that has now become the name of the whole area.

Councillor Lewis also said the planned changes to the road at the bottom of the cliff face would also be delayed for the time being. The cliff side of the carriageway would open for parking while traffic would continue to travel along the seaward side as at present. This arrangement would mean, for the time being more space for parking. The intended scheme would reduce the number of parking places in the area is disliked by many. It would have included a taxi rank and coach parking bays outside the theatre and a stop for the land train as well as disabled parking. This would restrict the number of car parking places to about ten compared to the 70 or 80 parking places for cars that were available prior to the work starting in Jan 2008. 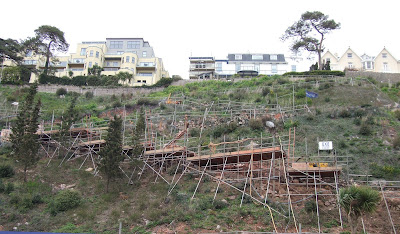 More scaffolding gone up but it still looks like it will not be open for this summer.
Posted by David at 23:56 No comments: