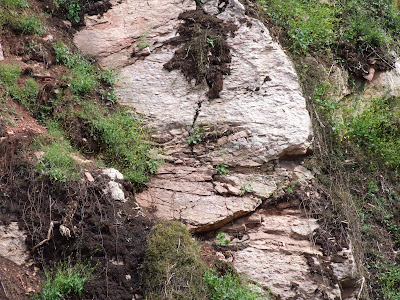 This is due to roots forcing the rock apart. Strong things roots. 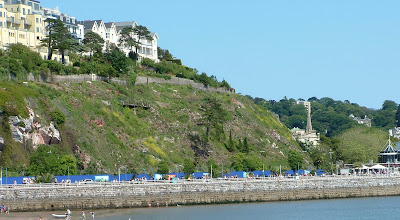 This is Rock Walk as it looks 3 months after the work to remove the trees was completed. The survey has been carried out and there has been little word from the council other than the repairs might cost a 'bit' more than expected.
No one seems to give a damn about the place now the road has been reopened. Not even the slight Rock Fall last Saturday has created a stir.
Work should start in September when the visitors have gone home.

A Story from the Herald Express

ROCK FALL DAMAGES ROCK WALK BARRIERS
03 June 2008
Torquay's Rock Walk has been hit by a rock fall.The special barriers erected after the cliff was closed off were damaged in the fall on Saturday afternoon.The damage occurred at the Torbay Hotel end of the cliff face.The cliff was closed off earlier this year after diseased and dying trees were removed from the rock face. It was then declared too unsafe to reopen the inland carriageway of the main seafront road.
Torbay Council is still awaiting the findings of the geologists' report into the state of the cliff face so it can start work on the repairs and reinstatement.Deputy mayor Kevin Carroll said: "We can confirm that there was a rock fall on Rock Walk on Saturday."A collection of rocks and soil fell at the Torbay Hotel end of the cliff landing on the lower path."There was also a larger rock, weighing approximately half a tonne, which caused considerable damage to the fencing below."We are unsure as to whether the rock was projected from the top or rolled down the cliff face."Cllr Carroll added: "Over the last few months there has been a huge amount of misunderstanding relating to Rock Walk."Some people have blamed the council's recent work for the rock falls and we would like to take the opportunity to reiterate the following."At no time did we remove any lower tree trunks or roots during the work."Geologists had already deemed the rock face to be unstable and the council cleared the area to be able to determine how bad the situation was - we did not create the problem, we have simply exposed the extent of it."We are now waiting for the geologists' official report, due out in the next two weeks, which will tell us what needs to be done and approximately how much it will cost."The safety barrier will remain in place until the necessary works have been carried out."It had been hoped to have the geologists report this week but the council has now asked for additional information on the potential cost of the restoration work.Staff at the Torbay Hotel and the nearby Pier Point restaurant were unaware of the fall.

Such a slight fall that the main barrier wasn't even reached never mind damaged.
Posted by David at 09:01 No comments: