The last 25 metres of Rock Walk its self has been closed to allow building work to be carried out on the replacement for The Palm Court Hotel. This work now appears to be complete but Rock Walk is still boarded up. On November 28 I took this photo and tweeted the council to see if the builders could be asked to remove their junk and reopen the walk way. 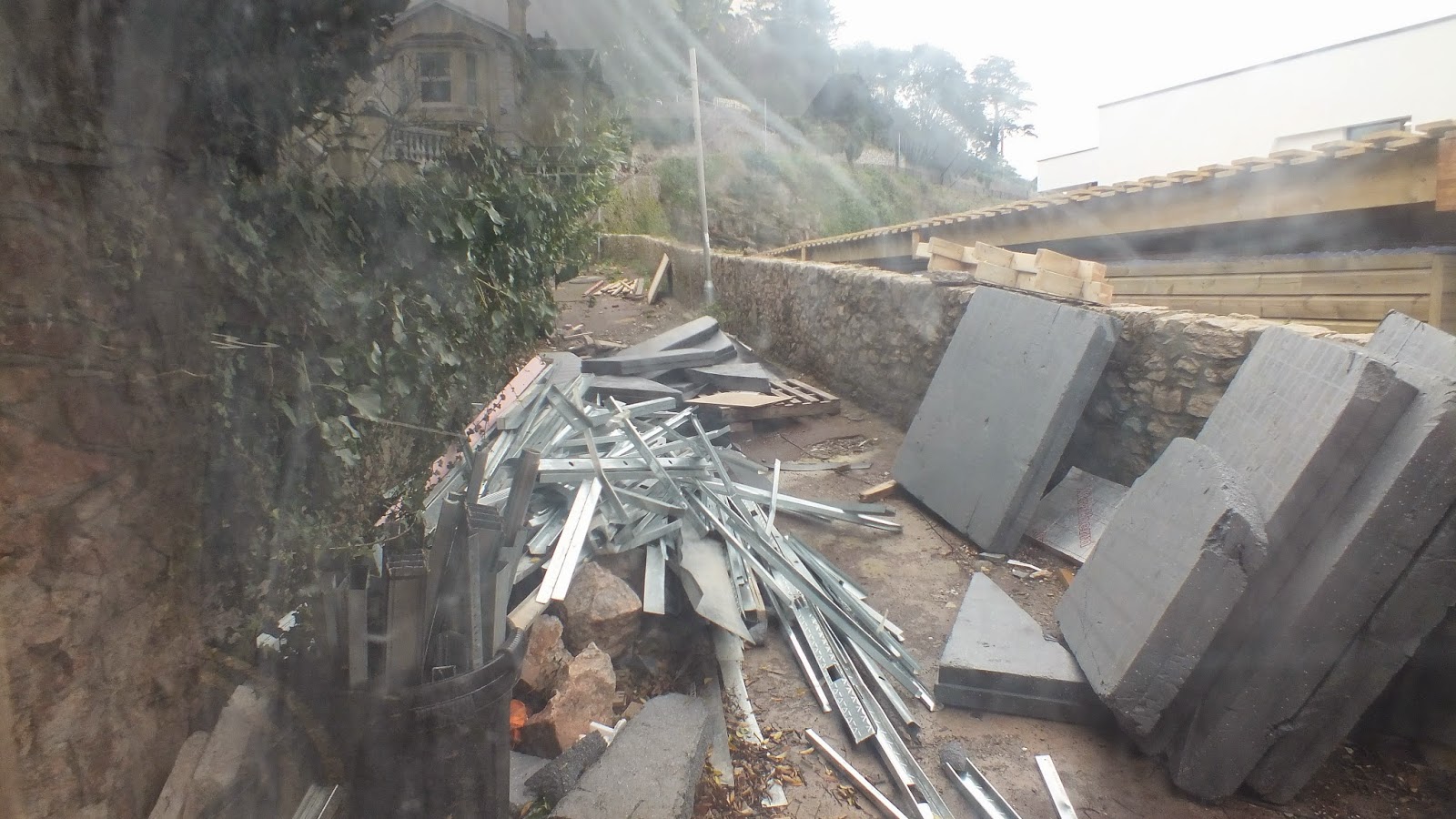 A month later I had a look, it would appear the junk has gone but sad to say it appears there has been some damage done to the wall on the left. That will need fixing before we can once again walk the full length of Rock Walk. 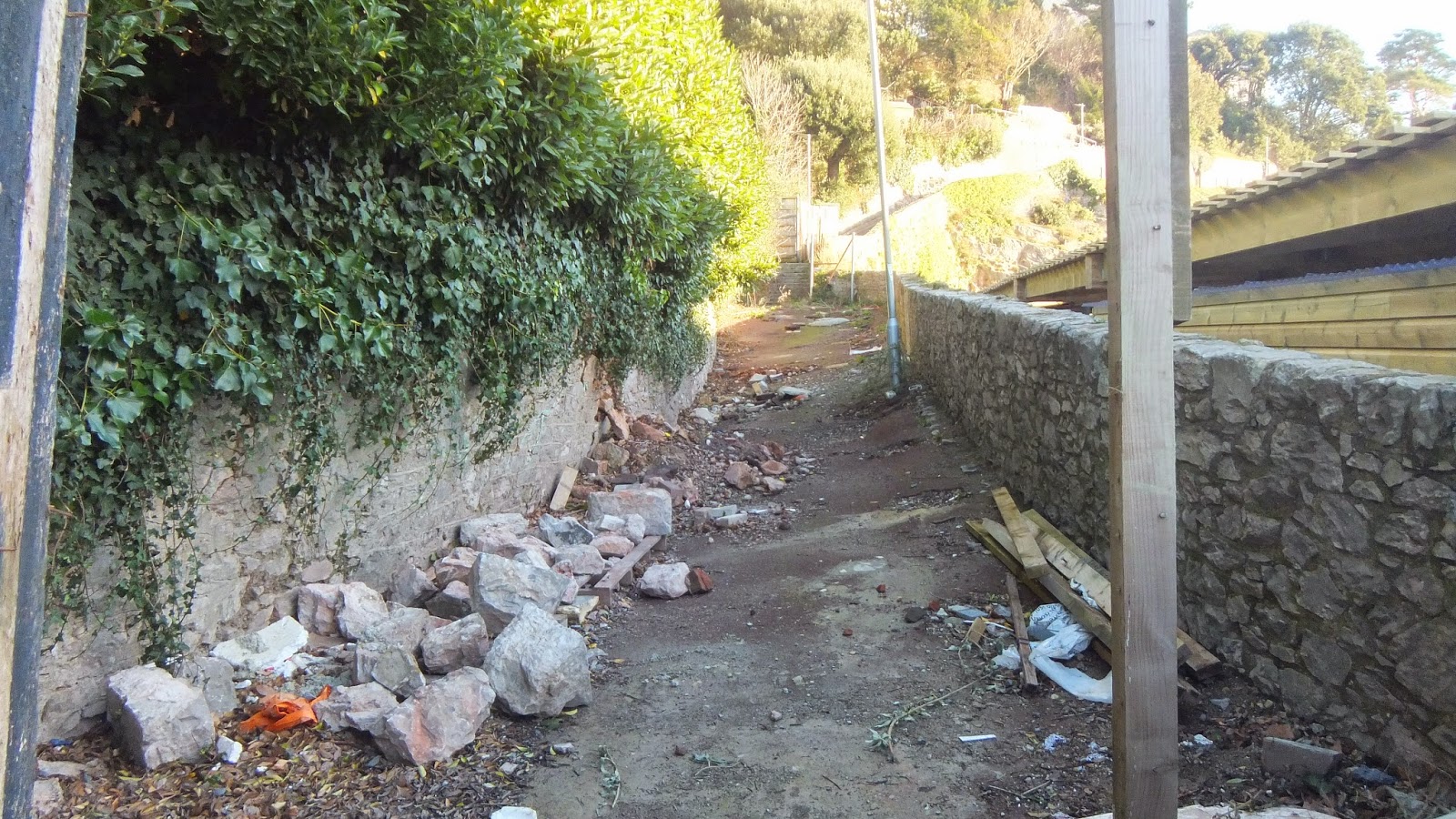 We must wait and see what happens next.
Posted by David at 15:00 1 comment:

Not much Happening at Rock Walk

No recent work has been carried out at Rock Walk and lots of weeds are appearing making it look a mess. The lights that once made this a magical place at night haven't been replaced and frankly I would have preferred the steps up to the top to be a little less intrusive.

Not many people make the climb anyway.
Posted by David at 14:22 12 comments: 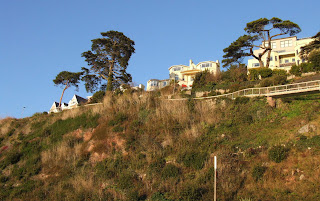 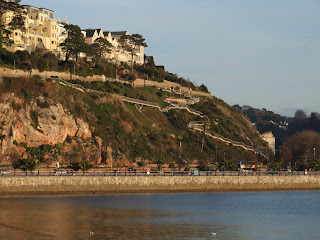 The vegitation on the cliff face is looking a little tattie. I have been imformed that work will start in the New Year to improve the look of the place.

I do hope that more floodlights and in the right places coloured lights are going to be fitted to brighten the place up at night. It would be nice, Councillor Lewis, if it could be seen from Brixham without the aid of night goggles.
Posted by David at 13:54 1 comment: 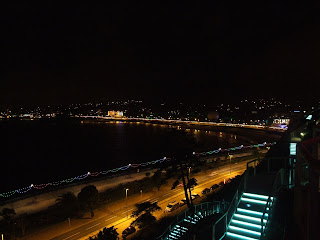 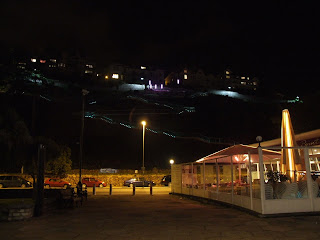 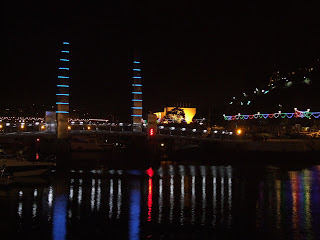 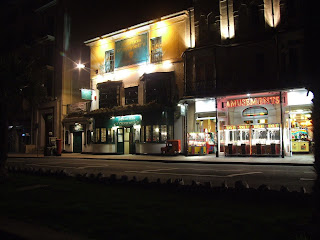 From the top at night the best view is towards the Grand Hotel and Tor Abbey Gardens. Even at 9pm there were people wandering about looking at the Bay by night. But His Holiness the Deputy Mayor, Councillor Chris Lewis's claim that Rock walk would be visable at night from Brixham seems to me a little farfetched (see second photo).
A few coloured floodlights are needed to bring the cliff face back to it's former glory and to interest the droves of tourists Chris is expecting to travel miles to see Torquay's latest attraction.
The photos of the Harbour Bridge and the pub I threw in just to make up for the disappointment of Rock Walk at street level.
Posted by David at 00:55 2 comments:

Saturday afternoon I went round to Rock Walk for the entertainment before the opening of the walkway up the cliff face. Had a brief wander round before having a few words with Professor Iain Stewart of Plymouth University. He was here to officially open The Royal Terrace Gardens, together with Nick Bye. Still I wont hold that against Iain who told me there was an other TV program on it's way which featured the North West Coast of Scotland, my favourite place on earth. I was going to get back later for the opening at 6:45 but at 6:30 the heavens opened instead so I stayed in. During the night there was a lot of wind and rain and I hoped the builders had done their job well and everything hadn't been washed away.

When I got up next morning there was a tree branch and the wild ground at the bottom of the garden. It had fallen down the 100 foot cliff face in the night.

To day, Monday, I had a walk up the steps, 150 up to the observation platform, no sign of a cafe selling cups of tea and ice cream but a fair number of people at the top taking advantage of the glorious sunshine and enjoying the views over the Bay. A couple of photos the 40 more steps up to the top. There is a pathway here that runs from Shedden Hill Road right across to the Harbour. This is the correctly called Rock Walk but the whole project is now know by the same name.

Here are a few photos. 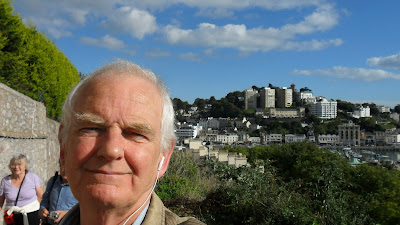 Me up on Rock Walk. In the back ground is the Harbour which from here is overlooked by the Three Ugly Sisters. 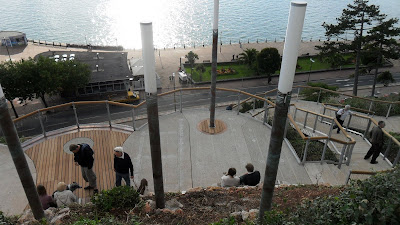 The Viewing platform, sans cafe but with a few viewers. The local long arm of the law making sure we weren't gettin high. 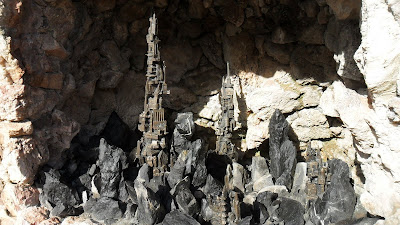 This struture is down at street level, this is what I imaging Ankh-Morpork would look like if it had been built on rock instead of loam.